Ontological Security: An Instrument for Western Geostrategic Intervention in the Caspian Sea (Emphasizing the Energy Issue)

The Caspian Sea, which is the largest lake in the world, with no natural waterway to the world's open seas, with a length of 1200 km and an average width of 300 km in the east of the Caucasus, has been the source of civilization and tribes since 75,000 thousand years ago. In the years before the collapse of the Soviet Union, the Caspian Sea was known as a common sea between Iran and the Soviet Union, and this de facto border was recognized until the collapse. Iran, with the exception of its own issues, did not play a role in the issues of the region. The Caspian Basin was the sphere of Soviet influence, and the Soviet Union dominated the northern, northeastern and western parts of the region as part of its territory. Following the collapse of the Soviet Union in 1991, a couple of countries were established in the Caspian region, while these states along with the great powers faced new challenges. The post-1991 Caspian Sea geopolitical region also emerged as an active and functional area. The most important issues that have changed the political geography and boundaries of the Caspian region are including: the Caspian Sea legal regime, ethnic conflicts in the countries of the region, regional energy resources as well as environmental issues. What is considered more important for Western powers is a strategic influence in a region that is considered a kind of "backyard" of Russia.
As such, the West tried to continue to engage in exploration, extraction and transfer of energy from the newly independent states to their strategic influence in the region. On the same basis, over the past two decades, the construction of energy transit corridors outside Russia and the Islamic Republic of Iran and security of energy supply has become the priority of the regional policy of these countries. Indeed, the policies and efforts of great international powers to secure their interests and strengthen their geostrategic position have paved the way for the safe transfer of oil and gas from the Caspian Sea resources. Meanwhile, the geographic situation of the region, the economic and political conditions of the Caspian region, the existence of potential sources of crisis in this area, as well as the process of global security and political developments in the world, including the factors affecting the production and the Caspian hydrocarbon supply to the consumer markets are instrumental. The elements have led to the adoption of new strategies by transnational actors to confront the Russia and Islamic Republic of Iran in the region, and the Caspian area has become an international conflict center and as one of the most enticing regions. Therefore  the economic revenues of the Caspian states are largely due to the energy supply and sale of energy carriers, they provide ontological security and the basis for defining the national interests affected by identity and cultural perception, and hence the definition of identity and normative from the region and its equations, they tried to keep these republics states in their sphere of influence.
The assessment of the status of the Caspian littoral states shows that the political and economic collapse of these countries has been heavily influenced by identity patterns that have been widely practiced and enjoyed by the United States and the West. Thus, these countries are desperate for attracting foreign investment and having a share of world market. Since most of the newly independent states are ruled by undemocratic regimes, the mentality of their leaders strongly affects their interactions with other countries of the region. Meanwhile, culture, language, religion, ideology and race as an opportunistic and identity challenge have played a large role in shaping the identity of states in the Caspian region, which can be reflected in the form of ethnic and religious tensions and terrorism.
The research question is that how the ontological security provides the basis for the geostrategic influence of the West in the Caspian region? The hypothesis of the paper is that security-related psychology in the Caspian Sea has become an excuse for the strategic influence of the West through an intervention to secure energy. In order to prove the hypothesis, the research method is descriptive-analytical and based on reliable statistics and documents.
As a result, it must be said that the energy sources in the region and the resulting developments have a major impact on the direction of these security components and the delineation of the boundaries between the internal powers in this region. Firstly, the social and ethnic tensions and the rise of Islamic fundamentalism threaten to exploit the hydrocarbon resources of the Caspian Sea. For instance, ethnic tensions on the northern route can be pointed out, which have created conflicting interests and security concerns for transnational countries, and secondly, the actions taken by large foreign powers to manage the component Security (such as counterterrorism, Islamism, and intervention to resolve territorial disputes based on ethnicity and race) justify the transfer of Caspian energy resources at a lower cost than the energy market. In this regard, the goals of the US and the West in the Caspian Sea, which apparently include the promotion of democracy and free markets, regional peace and cooperation to create business opportunities, but in practice such efforts have focused on energy issues. Hence, it can be said that the existence of energy resources in the Caspian Sea is a hedgehog of two tails because it can also be a source of income or a basis for cooperation with neighboring countries, and on the other hand, by not defining the legal regime of this sea, the strategy of the West in the region brought potential risks to coastal countries (Iran and Russia). With this process, it is not surprising that the continuing disagreement over the Caspian Sea borders does not encourage the involved countries to prepare themselves for military self-defense. 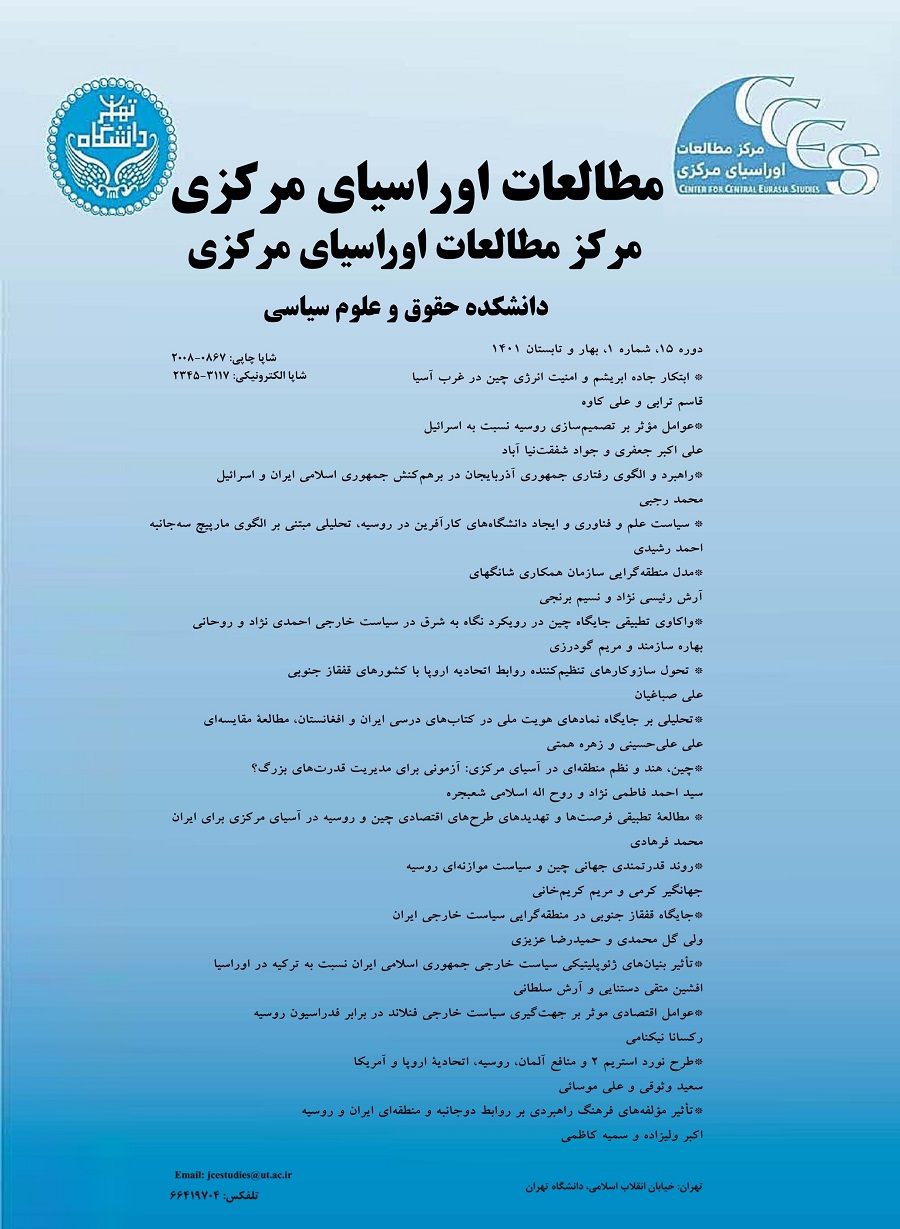